In the education space, stakeholders in India ( at least private
schools and ’learning solution providers’) have moved to E-learning. An estimate is that overall, technology adoption has been accelerated by upto two decades,
thanks to COVID.

Two things stand out. We would not have done it, if we did not have to
do it! While online tutoring had caught on in a big way, educational
institutions were definitely not leveraging technology to the extent
it should have happened—till COVID. The other, more heartbreaking, is
that this is adding to the already stark inequity in educational
access. The point is not to deny access to some because it cannot be
universal. The point is rather to go on a mission to make it
universal!

In contrast—SITE (Satellite Instructional Television Experiment)
undertaken by India in 1975, was a proactive effort to use technology
for education and development communication for the most-unreached.
Imagine 1975, when TVs were hardly seen even in urban households. Here
was an unimaginably bold initiative to take TV to 2400 of India’s most
backward villages in 6 states.

There were questions even apart from our technical ability to do this—was such an experiment necessary for a country at our level of poverty and problems? Surely, there were more pressing problems and more immediate use for the scarce resources? But the conviction of a team led by Dr. Vikram Sarabhai, that technology-leapfrogging was critical to solve India’s development challenges,
ensured that the topmost decision makers saw the advantages and they
could make  it happen. (‘Technology-leapfrogging occurs when
decision-makers choose to adopt leading-edge technology, skipping one
or more technology generations’).

This was a NASA-ISRO partnership with the objective of using technology for the education of communities in the most deprived and unreached parts of the country . A NASA broadcasting satellite was used. In the first-ever Indo-US space collaboration, it was positioned over India for the
duration of the experiment (August 1, 1975 to July 1976). The
deeply-researched content on critical issues faced by the community,
from agriculture and health, to culture to short films promoting
scientific temper, the production was done mainly by All India Radio,
with social research and evaluation done by a special team from ISRO,
and with the involvement of experts from a range of the most
significant institutions of India-Tata Institute of Social Sciences, to NCERT. Apart from community programs, there was a rich variety of special educational programs for schools as also massive teacher training. 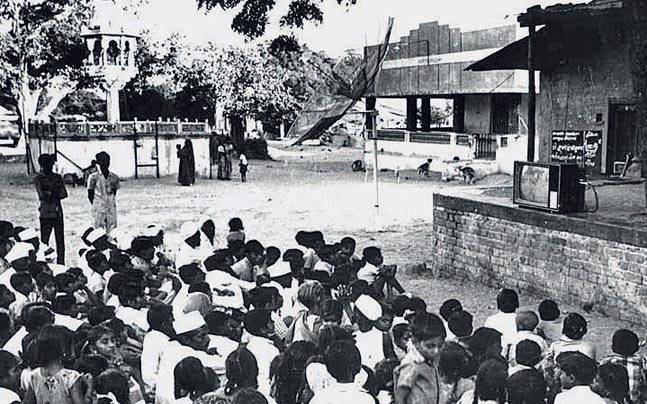 The programs were broadcast for a few hours a day, and hundreds of
people would gather in the village community hall or wherever the
village had installed the TV. In villages which did not have
electricity, truck or car batteries were used to power the viewing.
People in remote Bihar were watching television while many in Delhi
had never seen one!

SITE was a resounding success in proving that technology had a huge
role to play in solving the real development challenges of the
country. It helped ISRO develop its capabilities in operational
satellite systems and contributed to a sound platform for the Indian
National Satellite System (INSAT). It helped us develop an
understanding of educational software programming, from social
research to production to evaluation. And it helped develop managerial
capacities. It was probably also the first time in India that a very
young group (mainly in their 20s) formed the core of the team taking
responsibility for such a complex task of national importance.

So even as education (for some) moves online, here is a Hurrah for the vision of the
giants on whose shoulders we stand! Can that infuse us once again?

And a Hurrah from the Millennial Matriarchs for some of the amazing
people who were part of SITE, whom we have had a chance to interact
with—Prof. Yashpal, Kiran Karnik, BS Bhatia, Binod Agarwal,
Vishwanath, Mira Aghi—to name just a few. We are thankful to life for
giving us these opportunities.

One thought on “And Long Before E-Education, there was SITE…”