The beginning of autumn

The September morning sky is dotted these days with dragonflies. It is an uplifting sight—to see them gliding gracefully, flitting, swirling and swooping like dancers against the canvas of blue sky and white clouds. I remember several Japanese Haiku that celebrate the dragonfly.

Dragonflies play an important part in Japanese life and culture. They are associated with autumn as well as spring, and are seen as harbingers of life and prosperity, birth, and renewal, happiness and strength.  Japanese art, literature, textiles, and design, as well as literature (especially haiku poetry) reflect this close association and respect. The red dragonfly is considered to be sacred. One of the popular traditional pastimes of Japanese children has been catching dragonflies.

The dragonfly is one of the oldest of the insect species, which has inhabited our planet for almost 300 million years. It is natural that these insects have become an integral part of folklore in many cultures which have developed their own beliefs associated with the form and life cycle of insect.

In China, people associate the dragonfly with prosperity, harmony and as a good luck charm. Amongst Native Americans, it is a sign of happiness, speed and purity.

In many parts of the world the dragonfly also symbolises adaptation, transformation and renewal. In Native American culture it was seen as a sign of resurrection after a hard struggle. This is probably associated with the metamorphosis that the insect undergoes in its life-cycle, from a drab larval stage in which it spends most of its life before it emerges as a graceful and colourful adult. Once it emerges, it has a very short time to live its adult life, but it seems as if it flies freely with no regrets. The Dragonfly’s scurrying flight across water represents an act of going beyond what’s on the surface and looking into the deeper implications and aspects of life. Thus it symbolises the virtue of living in the moment and living life to the fullest, while at the same time looking deeper.

Across cultures, the dragonfly has been associated with magical qualities and mysticism. This may be associated with the fact that they exhibit the phenomenon of iridescence, which means that the body of the dragonfly can reflect and refract white light to create beautiful colours that change depending on the angle of light or the angle from which you look at them. Thus they also symbolize illusion–making others see you the way you want them to see!

Dragonflies are respected by fishing communities. In some places it is believed that plenty of dragonflies over a particular spot meant there were plenty of fish around. If a dragonfly hovered near the fisherman, he took it as a good luck sign.

I had not realised what a deep and rich association the dragonfly has in so many cultures. However I have not found much about this association in Indian culture. We do tend to somewhat overlook, let alone write poems about, these flying insects as they neither catch our eye as butterflies do, nor intrude into our daily life as flies and mosquitoes do.

But I did come across something that makes immediate sense for me. Seeing swarms of dragonflies means that rain is on the way; and as our  monsoon still lingers this year, maybe they will bring more rain! And, more practically, that dragonflies are very useful in helping combat the mosquito and other pests that constitute their prey. I definitely consider having them around my house as a symbol of health and good luck! 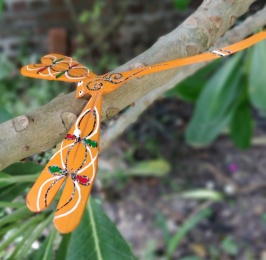 nothing else but eyes.

One thought on “Dragonflies”