May 23 is World Turtle Day. And this is my turtle tale! 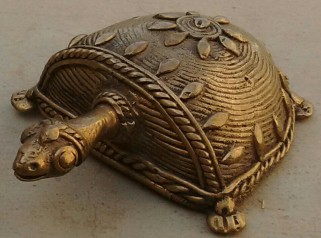 It was an unlikely subject–not one that I would have volunteered for! Among the diverse subjects that I had an opportunity to learn about when I was developing a series called NatureScope India, Turtles happened to be the subject of the next issue. That was going to take some research on my part! As it turned out, I found out a lot about turtles, but also had the wonderful opportunity to meet someone extraordinary–Dr Priyambada Mohanty-Hejmadi.

Dr Priyambada was a member of our Governing Council in the early 2000s. Sarees being a greater passion for me than turtles, I always admired this elegant lady who used to wear the most beautiful handwoven sarees from Odisha. Then I found out that she was one of India’s foremost authorities on turtles! And that she was also one of the earliest and well-known proponents of the Odissi dance form. What an awesome combination!

Over 60 years ago, Priyambada was already learning Odissi, when as a student she represented Odisha at an Inter-University Youth Festival in New Delhi and gave a performance of Odissi. This was perhaps the first time that the dance was performed outside of Odisha. The audience was rapturous, and a review by a Hungarian dance critic, put Odissi on the pan-Indian map. Today this dance form has found a niche in the international arena.

Of the seven species of turtles in the world, five species are known to occur in Indian coastal waters—the Olive Ridley (the smallest), Hawksbill, Loggerhead, Green, and Leatherback (the largest). Sea turtle females come ashore to lay their eggs. Orissa is the only state in India which has three large rookeries or turtle nesting sites of which Gahirmatha is the world’s largest known sea turtle rookery.

Priyambadaji has been at the forefront of the efforts to protect the Olive Ridley Turtle. Not so long ago these turtles were endangered due to the disturbances in the areas where they nested.  With the active campaigns and efforts of a number of groups, and with inspiration and support from people like Priyambadaji, there is now a resurgence of nesting turtles. This February-March it is estimated that nearly four lakh turtles came ashore for Arribada—a Spanish term for mass nesting, to lay their eggs on beach at Gahirmatha that was declared a marine sanctuary in 1997 by the Odisha government.

Advocating policy changes, supporting local NGOs to create awareness, and guiding plans for protection, while also pursuing academic research and writing, Dr Priyambada has been an inspiring supporter of the Turtles.

Dr Priyambada’s work in science earned her a Padma Shri. Her academic excellence saw her as the Vice Chancellor of Sambalpur University. Her passion for, and life-long immersion in dance has led her to write a number of books and articles on Odissi and related subjects.

I feel honoured to have had the opportunity to have interacted with this inspiring lady, who so graciously took the time to give her comments and guidance on the draft of the NatureScope book on Turtles. Priyambadaji truly demonstrates an interweaving of Science and Art, as beautiful as the sarees she wears!