Imagine an alphabet that ended questionably with a Y? rather than a reassuring Z! Well there was actually a time when this familiar tailender was removed from the alphabet!

The English alphabet we know today took its modern 26-letter shape in the 16th century. But the origins of most letters of the English alphabet can be traced back to Egyptian hieroglyph symbols of 4,000 years ago, with a sprinkling of Semitic, Phoenician, Greek and Roman influences thrown in.

As with many letters of the English alphabet, Z also has an interesting history. Three-thousand years ago the Phoenicians used a letter called ‘zayin’, meaning ‘ax.’ It was in the form of a vertical line, with horizontal lines at the top and bottom–like an uppercase ‘I’.

The Greeks adopted it as ‘zeta’ around 800 BC. By this time the vertical line had become slanted, and the top and bottom lines had become elongated. Zeta took on the shape that we know as Z today.

But around 300 BC, the Roman Censor Appius Claudius Caecus felt that this letter was not being used frequently and decided that it had become archaic, and this letter was removed from the alphabet. According to some biographers he simply did not like the sound of the letter, and felt that when it is pronounced by pulling the lips over the teeth, the speaker looked like a smiling corpse!

So Z returned to the 26th place, but it was not always the last. For years, the ‘&’ symbol (now known as the ampersand) was the final letter. The symbol was pronounced as “and” but always used together with the Latin ‘per se’ meaning ‘by itself.’ So when rattling off the letters  “X Y Z and per se“ these rolled into being recited as ”X, Y, Z, ampersand.”

Early English did not have a Z, but used S for both the sibilant sounds. Even today the letter is relatively less used in ‘British English’ spellings as compared with ‘American’ English; (it is sometimes an irritant to find all these words underlined by Spellcheck if spelled with an S!) 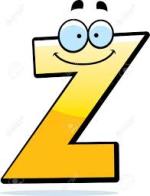 he English dictionary and discover that the majority of the words listed there have their origins in a variety of other languages and cultures. Who would have thought that “ze leetle zee” would have such had such an adventurous history!

I for one enjoy the letter Z. It’s zippy, zappy, full of zest, and helps to create the right buzz!