The verdant forests of Panna, Madhya Pradesh. We were able to visit two weeks ago. And were lucky enough to see a tigress and her cub. What a majestic sight! The tigress was pretty big and healthy, the cub frisky and curious. The mother was contemptuous of the humans in their vehicles going into contortions to catch a look, to take a pic, to exclaim to each other. She moved when she felt like, sat down and relaxed when she felt like. Not looking in the direction of the vehicles even once, though she knew we were there. She was the queen of her territory and saw no reason to acknowledge us.

It was a wonderful feeling. To see the healthy tigress and her confidence in her security. The active cub, about 5 months old. The number and variety of herbivores. And the thick forests and healthy, lush greenery.

It would be good to have seen this in any of our protected areas. But especially gratifying when we go into the story of Panna. Panna was declared a National Park in 1981, and subsequently a Tiger Reserve in 1994. The tiger population in Panna was down to zero in Feb 2009, thanks to poaching. It was a sad time indeed for India’s conservation efforts.

Things started to change with the posting of Mr. Sreenivasa Murthy, who took over as Chief Conservator of Forests and Field Director, Panna Tiger Reserve. They speak of the tough measures he took in securing the Park, coming down hard on all incursions, trespass, illegal activities and poachers. Even as he protected the area and worked on the morale of the Forest Staff, he built on the already initiated plan for re-introduction of tigers into the Park. Starting with one tigress in 2009, six of the species were introduced from different parts of the country. And it was not an easy task. As the Panna website tells it, one of the re-introduced males strayed out of the protected area into unsafe terrain, and 70 Park staff led by the Field Director followed it on elephants for 50 days, securing it from gunshots, poisoning and electrocution, till at last they were able to tranquilize it and bring it back into the safe area. All the hard work paid off and the re-introduction worked, with the first litter of cubs born in Panna in 2010. The results are obvious today, with the Park now home to 51 tigers. Several cubs have been born this year too.

Nothing is achieved by one man alone. But equally, individuals make all the difference. And in the case of Panna, this individual was Mr. Murthy. He has been posted out of the Park, but even today, drivers and guides speak his name in hushed tones, in tones of awe. And when respect and admiration penetrate to all levels, it is surely the greatest homage to the real difference someone made. 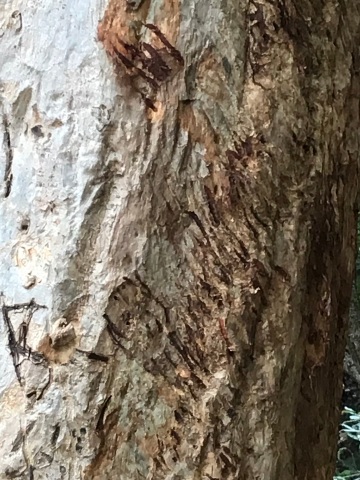 So a huge THANK YOU Mr. Murthy and all our Forest Dept. staff who work in extremely difficult situations to ensure that our biodiversity and natural heritage are safe. The thick forests of Panna, the variety of animals and birds we saw, of whom of course the tigress and cub were at the peak, the flourishing trees and plants—all of these stand testimony to your efforts.

(There are many trees like the pic, with nail marks made by bears climbing them to get at honeycombs.)

PS: We did not get any pics of the tigers—we were too busy looking at them. And anyway, they were far away and our phone-cams were not up to the task.

But a few other pics from the Park and Pandava Falls nearby. Photo credits: Prof Samir Barua.