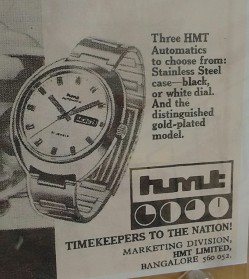 e passage of time was marked by the HMT watch!  One’s first watch, the graduation watch, the watch that one was gifted, or gifted for a wedding—all these came in the form of an HMT watch.

It was the bond that was also marked by a sense of national pride in wearing something of world class quality that was totally indigenously manufactured. The news of the shutdown of the HMT factory in 2016 saddened many faithful users and supporters.

A recent visit to the HMT Heritage Centre and Museum in Bengaluru was like a travel back in time, reviving many memories. Set in the verdant grounds of the HMT Township, and housed in a lovely old two-storied bungalow that was once the residence of the Chairman, the exhibits trace the history of Hindustan Machine Tools Limited (HMT), the country’s first machine manufacturing company, set up by the Indian government in 1953. While HMT is usually synonymous with watches, it was a company manufacturing a number of other products including tractors, bulbs, machine parts, printing units and defence equipment. The museum includes exhibits of the great variety of these products, and traces their history, along with interesting facts and figures. For example it is interesting to note that there was a time when most of the factories in India had at least one HMT machine and every household had at least one HMT product.

The display starts with a pictorial chronology of the history of the company, and how it marked its presence in different parts of India. Then, of course, are the watches—over 2000 of them mounted on wooden blocks which are recycled from benches, windows and doors from the school and employee quarters that HMT once used to run in the vicinity. From the first watch presented to the then Prime Minister Jawaharlal Nehru in 1962 till the 100 millionth watch manufactured and gifted in 2000 to the then Prime Minister Atal Bihari Vajpayee—the array boasts several other landmark models—Braille watches, India’s first Day-Date quartz and Ana-Digi watches, watches that were used as fashion accessories, and even the Nurse Watch that nurses who could pin upside down on their uniform for quick viewing. Models named Archana, Sujata, Abhishek, Kanchan, Sona and Lalit became part of millions of families across the country, as did Janata—the common man’s watch. Walking through this section one could nostalgically identify the models that one’s own family members wore.

The next section provides a peep inside the casings to reveal the cogs and wheels that made these time pieces go tick-tock; and the sequence of putting these different parts together. Magnifying glasses and microscopes help to look closely at some of these minute parts. One can only marvel at the meticulous care with these were assembled.

Moving on to the next large and well-lit space we see some of the other machines and printing equipment that was also manufactured by HMT. To get a real feel of walking onto a factory floor, is the time clock which the workers used to punch in their arrival by pushing down a lever. This is operational still, and one can punch and print the time of one’s visit on a card. The display of a variety of machines is impressive indeed. Imagine a company producing everything indigenously, from a part the size of a pin head to giant tractors!

The first-floor documents the range of machine tools manufactured by the company since its inception, along with a world map that indicates their collaborators from across the world. An AV room plays a video that shares HMT’s history, and its different units. The last section explains the origin and development of the HMT tractor, along with its functioning parts. There is also an operational tractor on which one can take a ride!

And while one is still lost in memories of the times that were, one walks out into the fresh air and greenery to a shop that sells some of the remaining pieces of HMT watches. A perfect souvenir of a legacy that we are all proud to be a part of.

One thought on “Timekeepers to the Nation”