It is Gandhi week, and newspapers are full of articles and pieces a 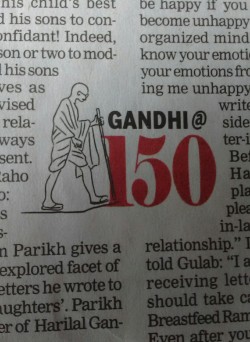 bout Gandhi, his thoughts and deeds. This year it is with renewed vigour as it marks the 150th anniversary of Gandhi’s birth. Being the prolific writer that he was, and the wide spectrum of subjects and areas on which he expressed his thoughts, every writer today can find some words of wisdom from Gandhi with respect to whatever they may choose to contribute for the ‘Gandhi special’ editions.

Gandhi himself was no exception to the pressure of meeting a newspaper deadline. Sometime in the second half on 1917 he wrote: I promised the Editor a contribution for the Diwali number of Hindustan. I find that I have no time to make good the promise, but thinking that I must write something, I place before the readers my views on newspapers. Under pressure of circumstances, I had to work in a newspaper office in South Africa and this gave me an opportunity to think on the subject. I have put in practice all the ideas that I venture to advance here.

Continuing, he went on to express his views on the business and ethics of newspapers of the day.

Newspapers are meant primarily to educate the people. They make the latter familiar with contemporary history. This is a work of no mean responsibility. It is a fact however, that the readers cannot always trust newspapers. Often the facts are found to be quite the opposite of what has been reported.  If newspapers realised that it was their duty to educate the people, they could not but wait to check a report before publishing it. It is true that often they have to work under difficult conditions. They have to sift the true from the false in but a short time, and can only guess at the truth. Even then I am of the opinion that it is better not to publish a report at all if it has not been found possible to verify it.

How interesting that the same debate about Fake news, and news used to provoke and promote dissension and distrust, continues to rage even today, albeit now, in the context not only of the print media, but all other media also.

Equally thought provoking and relevant are his concerns about the potentially dangerous role that newspapers can play.

It is often observed that newspapers publish any matter that they have, just to fill in space. This practice is almost universal. The reason is that most newspapers have their eye on profits. There is no doubt that newspapers have done great service. …But to my mind they have done no less harm. …many are full of prejudices, create or increase ill will among people. At times they produce bitterness and strife between different families and communities. …On the whole, it would seem that the existence of newspapers promotes good and evil in equal measure.

He continues with his canny observations on how revenue from advertising tends to override other journalistic responsibilities. And this was over a hundred years ago!

It is now an established practice with newspapers to depend for revenues mainly on advertisements, rather than on subscriptions. The result has been deplorable. The very newspaper which writes against the drink-evil publishes advertisements in praise of drink. Medical advertisements are the largest source of revenue, though today they have done and are doing, incalculable harm to people.  I have been an eye witness to the harm done by them. Many people are lured into buying harmful medicines. …No matter at what cost or effort we must put an end to this undesirable practice or, at least, reform. It is the duty of every newspaper to exercise some restraint in the matter of advertisements.

Ironically my newspaper today has ten full-glossy pages creating aspirations of ”dream” lifestyles, and wooing consumers with advertisements of state-of-the art luxurious residences, gadgets, and holidays; and profligate indulgences in food, drink, clothes, cosmetics and more. The other ten pages has the kind of news that Gandhi had been so concerned about (violence, intolerance, discrimination and disparity), along with a sprinkling of pieces about the Gandhian tenets of simplicity, honesty and truthfulness, and introspection! Contradiction, or comfortable and convenient co-existence? Something to think about indeed!