Every time I come across a crossword clue which calls for filling the name of a South American mammal, the first lines that come to mind are:

The one-l lama, he’s a priest.

The two-l llama he’s a beast.

And I will bet

There isn’t any three-l llama.

One of my favourite verses from one of my favourite poets—Ogden Nash! Frederic Ogden Nash was born on August 19, 1902, in the city of Nashville in America. Nash was a college drop-out who tried his hand at different jobs before joining the marketing department at the publishing house Doubleday. At the age of 29, he received international acclaim with Hard Lines, his first collection of humorous poems published in 1930. Following this, he left his job to concentrate fully on writing. He was a keen observer of American social life, and his writing anti-establishment. His tongue-in-cheek humour, and often irreverent poems caricatured the pretentious middle-class mentality of America in the thirties and forties. He wrote prolifically, over 500 poems including long winding verses, pithy two-liners, and take-offs on sonnets , ballads and limericks with his own inimitable play with, and, on words.

Nash considered himself a “worsifier.” He had a wicked sense of humour, and a clever way with words that always make me chuckle, no matter how many time I read his poems.

To celebrate Ogden Nash, sharing some of my old favourites, on creatures big and small.

The cow is of the bovine ilk 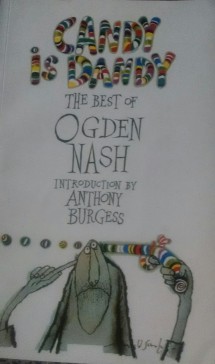 One end is moo, the other milk.

A mighty creature is the germ.

Though smaller than the pachyderm.

Is deep within the human race.

His childish pride he often pleases

Do you my poppet, feel infirm?

You probably contain a germ.

The ant has made himself illustrious

Would you be calm and placid

If you were full of formic acid?

God in His wisdom made the fly

And then forgot to tell us why.

In the world of mules

There are no rules.

The trouble with a kitten is

Eventually it becomes a

Tell me. O Octopus. I begs.

Is those things arms, or is they legs?

I marvel at thee. Octopus;

While his observations on the human race are somewhat lengthier, here are some short and snappy classics!

A bit of talcum

Children aren’t happy with nothing to ignore

And that’s what parents were created for.

Birthday on the Beach

I would not boggle

Except when I jog

The day your descendants

I would live all my life in nonchalance and insouciance

Were it not for making a living, which is rather a nouciance.

Luckily for him, and for us, Ogden Nash could make a living from his insouciance, and his verse delights us even today!