Come May, and it was time to begin the summer excursion from Delhi to “home town” Bhavnagar, in Gujarat. This entailed a long hot dusty meter-gauge train trip to Baroda or Ahmedabad, complete with bedrolls, surahis of water and much food carried, and bought from the stations. Some years later when the first Deluxe train with AC sitting coaches was introduced, it was the very height of luxury! One’s best outfits were to be worn en route, and there was much anticipation about choosing comics and magazines from the AH Wheeler stall on the platform. That was only Part 1. Part 2 involved an equally long and hot and dusty onward bus on the state transport or ‘ST’ bus. And then, we were there!

Bhavnagar had the double bonus in that both my paternal and maternal family homes were in the same town…and within a stone’s throw of each other! Two houses, two sets of aunts and uncles, and two sets of cousins! Where was the question of feeling bored, or not knowing what to do next? Most of the morning was spent in doing nothing much, while waiting for one’s turn to have a bath. As the hours rolled from breakfast to lunch, one of the assigned duties was to go up to where the home-grown mangoes were laid out to ripen, and pick the ones for lunch. Another one was digging ice cubes out of the dinosaur-age fridge and making a bucketful of cold water to drink. As one grew older, the duties graduated to squeezing the pulp out of the dozens of mangoes, and learning how to roll chapatis! Replete with mango ras and an array of newly-made pickles it was time for a long siesta, with the gaggle of old and young, lying down from wall to wall in the central room, with the vetiver or khus ‘chicks’ keeping out the glare and keeping us cool. (Another assigned duty was sprinkling water on the chicks).

Post-siesta special outings involved a ghoda gaadi (tonga) ride into the ‘bajaar’ accompanied by an aunt. Walking through the crowded market with halts to buy thread for embroidery, or fabric for summer clothes was indeed an adventure. And then, the delicious process of ‘designing’ one’s own clothes…to be executed by the family tailor who sat at his machine, day after day, in the verandah, whirring out baby-doll pyjamas, ruffled frocks, and basic petticoats and bloomers! (The person whose clothes were being tailored on the day was assigned to ensure that the tailor was kept well supplied with food and water). Talk about bespoke wardrobes!

As soon as the peak heat of the day abated, it was time to walk across to the other house. More cousins, more food and more fun and games….learning to ride the bicycle; pretending to swim in the 6 by 6 feet water tank; trying to get on to the roof with clay tiles (and being scolded by granny); climbing trees, and huffing and puffing up the  hill to the temple…After sunset, when the grand-aunts came by, it was time to sit on the steps and the jhoola, and listen in on the family gossip!

Dinner in the open chowk, all seated in a circle on the wooden paatlas, with much noise and merriment. (Later this evolved into several tables of varying heights put together to form a long dining line). Bedtime involved tying of mosquito nets and making of beds–in the front courtyard or on the flat terrace, depending on which house we were spending the night at. And, falling into a blissful slumber, under the starry sky, after a day well-spent.

And so the summer passed…until it was time to start the trek back. No helicopter parents, no scheduling, no planning, no personality development classes, no activity clubs, no life-coaching, no play dates! We drifted along languorously, and yet every day was packed. A good time it was indeed, to be young!

Last week I visited the home town. Much has changed. Only one of the beloved homes still stands, empty now; but housefuls of memories remain, as fresh as if it were yesterday. 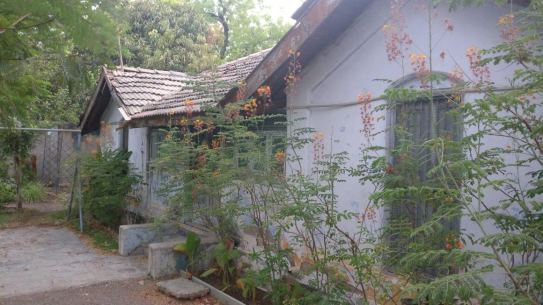