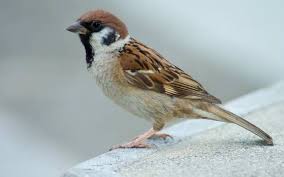 n I was growing up in Delhi, house sparrows were very much a part of our lives. They were everywhere, and by the dozens. In fact, most children of those times got their first nature lessons by watching sparrows—the sex differentiation, how they built their nests, the eggs hatching and the parents feeding the young, their mud-bathing etc.

Everyone loved them, but that is not to say they did not give us some headaches. In the summers, they would fly into the house, and it was a mad scramble to switch off the fans and shoo the birds out before they were hit by it and died. And mothers would keep long sticks handy to chase them when they showed signs of making nests in the fan-cups.

For many years now, sparrows are not to be seen so easily. Now, the recently published ‘State of India’s Birds’ assures me that I need not worry because the population of sparrows has been stable in India for the last 25 years. I believe it, because the report is the result of a collaboration among ten of the most respected research and conservation organisations in the country. But I do know that the population has significantly declined from say 35 years ago. And I do wish I would see more of chirpy little birds.

The report also says that the population of peafowl has increased manifold. This may be attributed, it is being said, to the spread of aridity in the country. This is not all good news, as peacocks come into cultivation and eat up growing shoots, causing harm to crops.

The report identifies 101 bird species as needing special efforts for conservation, including specially raptors and water-birds.

The report is a landmark in Indian conservation efforts, because it provides good quality baseline data, which can help shape conservation efforts and their monitoring. It is also unique in that it is based on data collected by citizens across the country–10 million observations collected by over 15,500 birdwatchers across the country. Truly participatory and truly large scale. And the fact that hard-core research organizations are guiding the effort, gives authenticity to the data and findings.

Knowing is the first step to acting. Now we know to some extent what we should worry about. Time to act now!