I saw in a dream a table where all elements fell into place as required. Awakening, I immediately wrote it down on a piece of paper, only in one place did a correction later seem necessary. Mendeleev

But reading about the declaration by the UN, of 2019 as 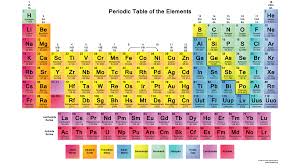 Year of the Periodic Table of Chemical Elements, did bring back some memories.

Why is 2019 so marked? Well, because 1869 is considered as the year of the discovery of the Periodic system by Dmitri Mendeleev, the Russian physicist, and it commemorates 150 years of the Periodic Table.

The Periodic Table, if you can recall your school chemistry, is a table of the chemical elements arranged in the order of their atomic numbers, so that elements with similar atomic structure (and hence similar chemical properties) appear in vertical columns.

Chemistry is usually looked upon as a swot or ‘rattu’ subject. The introduction to the Periodic Table is the first time students get to understand the pattern and logic of chemistry. From being a random assortment of letters, elements and their properties being to make sense. It becomes possible to predict the types of chemical reactions that a particular element is likely to participate in. Without memorizing facts and figures about an element, students can, from looking at the position of an element in the table, understand about the reactivity of an element, whether it is likely to conduct electricity, whether it is hard or soft, and many other characteristics.

And hence a whole world opens up!

And coming to the Day. Oct 23 is Mole Day. Not MOLE as in the four-legged creature. But the MOLE that chemistry students struggle to understand. The definition of this mole, as the base unit of a substance having 6.02 x 1023 particles is really confusing to begin with. Exploring another definition– mass of a substance that contains 6.023 x 1023 particles of the substance—does not really help either. As a Masters’ student of Chemistry, I was expected to help younger kids in my colony with the subject. And how I struggled to explain this concept! (I shall not venture into such an attempt now, but I think those struggles helped me understand it better).

But at least Mole Day and Year of Periodic Table have reminded me of some claims I may make to be scientifically literate!

One thought on “Mole of Memories, Table of Nostalgia”